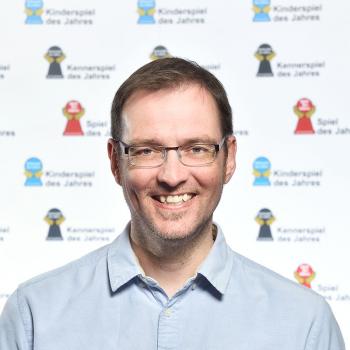 Hauke Petersen was born in Bremen in 1974, is married with two children and lives in the town of Georgsmarienhütte in Lower Saxony. Since 2008 he has worked as a local editor for the Neue Osnabrücker Zeitungnewspaper. A traineeship at the same paper was followed by two state law exams.

It was his father who introduced Hauke Petersen to hobby games at an early age. The very first “Spiel des Jahres” winner HARE AND TORTOISE remains one of his favourite games to this day. After other classics such as SCOTLAND YARD and THE GAME OF LIFE, more obscure titles such as FULL METAL PLANETE and ROBO RALLY were later brought to the table. He also got involved in role-playing games (DARK WORLD) and the collectible card game MAGIC: THE GATHERING, which developed into something of an addiction.

Since 2009, Hauke Petersen has reviewed family and expert games for the Neue Osnabrücker Zeitung, joined by children’s games in 2014. Together with his colleague Karsten Grosser, he has put together a regular games page for the newspaper. The two of them also run an online games portal.