What’s the secret word that will allow the villagers to chase away the werewolves from their village? The mayor knows it. Everyone else has to ask him yes or no questions: “Can you eat it?” or “Can you buy it?” Players only have a few minutes to find the solution. This is actually a well-known guessing game but here the questions need tactical finesse, as every player has a secret role. Werewolves have managed to infiltrate the village community. They happily throw in their guesses, even though they already know the magic word, trying to put the villagers on the wrong track. They can’t make themselves look too suspicious, though, because as well as discovering the magic word, the villagers will also win if they can unmask the werewolf.

The well-known principle of the hidden role game Werewolf has fascinated players for many years. With Werewords, Ted Alspach has cleverly managed to combine it with a word guessing game. It may seem absurd that some players spend the whole game trying to guess a word that they already know in order to hide their identities, but it’s actually a fabulous twist. It’s amazing how much enjoyment is possible in a five-minute game. 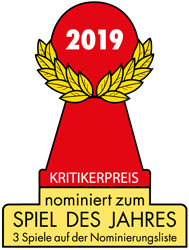 Different information from the publisher: 3-10 players.