Players are in pursuit of prestige in 15th century Strasbourg. They can increase this by sending family members to guilds and to the city council. There, using a bit of luck and a lot of strategic skill, they have to make their influence count. The key to victory is how the players divide their 24 influence cards between the game’s five rounds, each with up to seven auction phases. The ranking of the bids decides who may place a master craftsman, assistant or apprentice and so advance to the council, move into the guild quarter and receive goods. Or who may sell goods as the merchant. It’s also important to influence the church and the nobility when building prestige-enhancing buildings. As that’s often the only way to achieve the hidden objectives each player receives at the beginning of the game.

Jury statement
Like a life mentor, Strasbourg demands that its players make plans and react flexibly to their opponents. Courage and caution are required in equal measure – whether during the individual division of the auction cards or by the selection of the objectives. These objectives can often give you strategies to pursue. The many quick auctions keep the excitement going and ultimately there are many paths to victory. 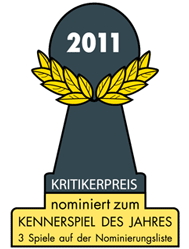