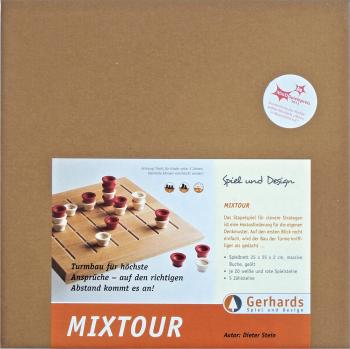 Deploying game pieces, building towers, moving towers around: this abstract, strategic game for two players follows known patterns but breaks with the typical rules for such moves. Paramount for the range of a move is not the number of pieces with which the moving tower is built, but rather the height of the tower on the target field. For example a piece can only be placed on top of a three piece tower if the tower is exactly three squares away. The route between the pieces and the target tower must be clear. The other player’s pieces may be also be moved, so that towers built of one’s own and the opponent’s pieces rise up on the solid beechwood board. When a tower reaches at least five levels the game is over. The winner is the one who owns the top piece of the winning pile.