Players are on the hunt for points in the dice game Ganz schön clever. The more effectively players can use the results of three out of six dice on their score sheet, the more chain reactions they start. The colour of the dice being scored dictates on which area of the sheet you can cross off spaces or write in numbers. Sometimes you have to complete rows, sometimes specific boxes need to be filled in, so that later boxes can be filled or higher numbers can be written. An additional challenge: dice that show a smaller number than the one already chosen go into the pool of dice from which other players can select. It’s advisable to work on all spaces of the score sheet at once, so that at the end of the game you can clean up in the fox spaces: now that is clever.

Begründung der Jury
“Ganz schön clever” fascinates as a quick dice game of a superior standard. Designer Wolfgang Warsch has joined together lots of little tasks so intelligently that players have to face a tricky decision with every roll. This leads to tension and creates a sense of ambition to get the high score each new round. Wolfgang Warsch has promised a game that is really quite clever and he has certainly delivered on that promise. 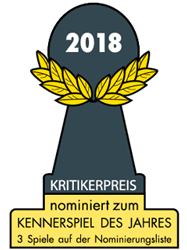 Different information of the publisher: From 8 years on.