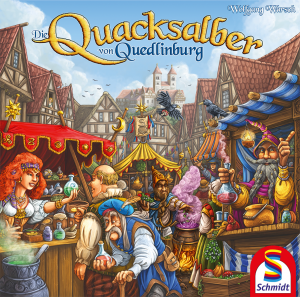 Mandrake root, ghost breath and toadstool. As quack doctors, players brew up new potions out of all sorts of unusual ingredients. These potions aren’t prepared according to some strict recipe but rather through pure chance: each player gradually draws ingredients out of their own mixed up bag of supplies. Most of the ingredients have positive effects. But caution is advised when adding the cherry bombs, as too many of these can cause a cauldron explosion. With the profit made from brewed elixirs you can purchase new ingredients and therefore produce higher quality potions. The player who can best weigh up the risk of an explosion and make good use of the game’s tactical possibilities has a good chance of winning this competition of the quacks.

Jury statement
Cooking up a potion with randomly chosen ingredients for “Die Quacksalber von Quedlinburg” causes taste explosions and emotional fireworks. Players oscillate between jubilation, lamentation and schadenfreude one after the other. A game of pure chance? Definitely not, as designer Wolfgang Warsch’s exquisite basic recipe leaves the players free to spice things up with some tactical possibilities. This mixed bag of ingredients becomes a delicious meal for games gourmets. 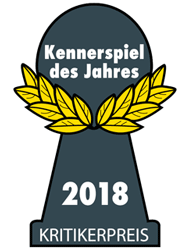